The magnificent Old West conjures up images of cowboys and Indians, lawmen and outlaws, as well as courageous frontiersmen, forging ever westward in search of freedom, independence and greener pastures. No other period has influenced American culture and defined its history as greatly as the Western frontier. Its legendary figures – Wyatt Earp, Calamity Jane, Wild Bill Hickok – are now commemorated in film and fiction. 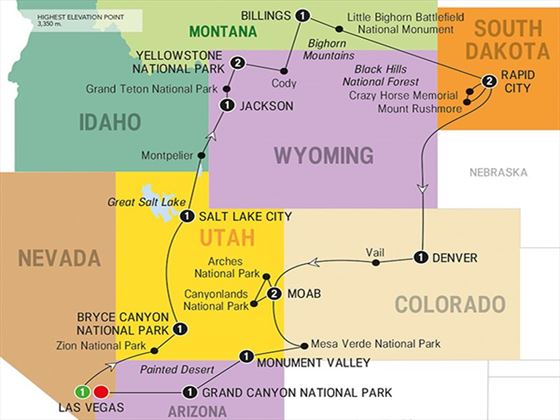 The price of this holiday is based on two people sharing a twin room and includes:

An orientation tour of Salt Lake City will give you a fascinating insight into its unique history and culture. It dates back to 1847 with the arrival of the Church of the Latter-day Saints (the Mormons), the first settlers in the valley. Your journey takes you on a long but fascinating drive south-east, travelling over the Wasatch Plateau into the remote Price and Green river basins.

This morning, when the light is at its best, you’ll visit one of the tour’s highlights, Arches National Park. Boasting the world’s largest concentration of natural sandstone arches within a relatively small area, there are around two thousand colossal sandstone arches, soaring spires, monoliths and balanced rock formations, making the landscape utterly unique and a photographer’s paradise. This Mars-like topography, with its changing colours of oranges and deep reds, is sure to leave an indelible mark on the memory. Spend the afternoon at leisure – your options include a boat trip on the Colorado River or a 4x4 offroad tour.

Leaving Moab, you will cross into Colorado and arrive at Mesa Verde National Park, the only one exclusively devoted to Native American archaeological remains. Marvel at the past dwellings of the Anasazi, an Ancestral Puebloan people who inhabited the area between AD 600 to AD 1300. Their intriguing mud-brick buildings are some of the best preserved in the country, thanks to the dry desert climate and the stunning cliffside location under massive folds of rock – a truly extraordinary sight.

Enjoy a real highlight this morning, on the Durango & Silverton Railroad, one of the USA’s best-loved heritage railways. Running on narrow-gauge tracks from the 1880s, the locomotives used today date from the 1920s and are completely coalfired and steam-driven. As the railway gains height, the scenery becomes more rugged, with the muted greys and pinks of the jagged peaks. The vintage train follows the Animas River Valley through the San Juan National Forest, until it reaches the ex-mining community of Silverton. Re-board your coach and head for the small town of Montrose.

Today you'll continue your journey to northern Colorado and the historic town of Fort Collins. You'll stop en route for lunch (not included) in the town area of Vail in Eagle County, located in the White River National Forest.

After breakfast, leave Fort Collins and head north to South Dakota, where you'll visit Mount Rushmore. Gaze up at the faces of George Washington, Thomas Jefferson, Theodore Roosevelt and Abraham Lincoln looking down over the Black Hills. You’ll be fascinated by the story of the one man who designed and sculpted this incredible monument and the ingenious techniques used in its construction. The next stop is Rapid City, the capital of South Dakota. Your hotel tonight is within walking distance of the downtown area, which is easy to explore on foot.

Heading east, you'll pass through legendary Deadwood, historic gold rush town and a National Historic Landmark, with its wonderfully restored Main Street. Settled by illegal gold rushers in the 1870s, it attracted gunslingers, gamblers and outlaws, including Wild Bill Hickok, gunned down here during a poker game. One of the town’s most famous citizens, Calamity Jane, was immortalised in the film of the same name by Doris Day. Crossing back into the wide-open spaces of Wyoming, you’ll visit the remarkable Devils Tower National Monument. The remains of an ancient volcano rising mystically above the surrounding area, it has been a spiritual icon for many of the Plains tribes and is also instantly recognisable as the aliens’ landing ground in Steven Spielberg’s film, Close Encounters of the Third Kind.

Today you'll cross into the vast grassy hills of Montana, site of the US Cavalry’s greatest defeat at the hands of Native American tribes. Commanded by the flamboyant Lt Col Custer, the famed US 7th Cavalry suffered huge losses against the combined forces of the Lakota Sioux, Cheyenne and Arapaho tribes. You'll spend tonight in Cody. While you're here, why not experience the Cody Nite Rodeo (nightly, from June till August).

The town of Cody is named after ‘Buffalo Bill’ Cody, US soldier, bison hunter, showman and one of the most colourful figures of the Old West. At 11, he worked on the wagon trains and at 15 he was the youngest rider on the Pony Express. He was also a Union soldier in the Civil War, a famed fighter against the Indians and most notably, the founder of the Wild West Show that ran for 30 years. After a visit to the Buffalo Bill Centre of the West, you'll cross into Yellowstone National Park over the 8,500-foot-high Sylvan Pass.

Wilderness is the theme of the day as you head into the park, the USA’s first and finest nature reserve. The scenery is simply breathtaking. See the stunning Lower Falls, twice the height of Niagara; the awe-inspiring Yellowstone Grand Canyon; bubbling mud pools, steaming rivers and hot springs, including the most famous geyser of all, Old Faithful. You might also catch sight of the park’s strikingly diverse wildlife, such as herds of bison and elk or, if you’re lucky, grizzly bears.

Today you'll continue the journey south through some fascinating landscapes, including a stop at the city of Idaho Falls, surrounded by the Snake River. Then you'll head back to Salt Lake City where you'll visit Temple Square and the Beehive house, one of the two official residences of the first Church leader, Brigham Young.

After a leisurely morning, you'll take an early afternoon transfer to the airport for your overnight flight home.

Experience more with so much included:

This is also available as a self-drive tour, either in a car or motorhome.  One suggested itinerary by car is:

Fill in your details below to book your perfect holiday.

Do you have some questions or would you like to book a holiday?